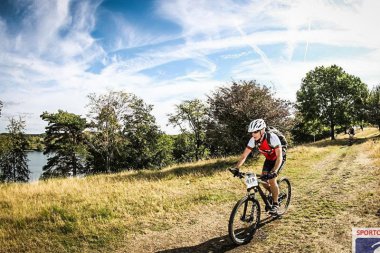 Six months ago it would have been impossible. But since then I've cycled a little further each week until the last few weeks I was regularly cycling over 100 km offroad and for 7 hours, hoping to kid my body that this was somehow normal.  But would it be enough?  No matter how much training I did, the 2000 height meters of the Vulkan Bike marathon was not something I could prepare for in the gentle slopes round here.

I had never cycled a marathon before (nor any other kind of cycle race, come to that), so wondered how different that would be. Would there be much jostling for position and competitiveness? Perhaps at the front, but not where I was. Everyone was a friendly and polite as usual, calling out to let you know which side they would pass you on and not trying to do that on narrow singletracks. What made a huge difference for me was the time limit. We had 6 and a half hours to cycle 85 km and 2000 height meters, which really meant that I had to cycle faster than I wanted to. Especially in the first two hours, my heart rate was close to maximum the entire time and barely dropped in the downhill stretches, because also there it was necessary to keep going as fast as possible. The landscape of the Volcanic Eifel was fantastic, so it was a shame that a lot of the time I was so busy focussing on my cycling that I couldn't appreciate it as much as normal.

The event was fantastically organised. It was interesting to see how it was different from our own tours. The first thing was that instead of our system of plastic arrows, carefully removed after every event, they just painted big arrows and other markings on the road or grass. That worked well, was very clear and probably much less work. But I don't think leaving paint behind in the woods and public roads would be tolerated here. The public roads in the villages we went through were mostly closed to traffic, which was a nice luxury, and what was amazing was that every one to two kilometres there were some first-aiders, usually sitting next to the fire engine from their village, and in their volunteer firefighter uniforms. I did not see any accidents (though a large number of punctures), but given the rockiness of the paths and the speed with which we hurtled down then, it was good to know that help was near at hand if necessary. Quite a lot of the firefighters also were cheering us on, sometimes just with clapping, but also with football rattles, cowbells (!) and at a couple of places large sound systems playing loud rock music to keep us going.

The first half I managed to keep up a good pace and even began to dream that I might make it with a good margin. However, by the time we got to the last giant mountain, I was slowing right down and my average speed was gradually dropping. Nevertheless, I knew that the last stretch was a fast section along an old railway line and so even if my average was below what it needed to be, there was still a chance.  Indeed, I was able to speed along that bit, pushing myself to use the last drops of energy I had over and in the end I crawled over the finish with only 13 minutes to go before it closed.

Although that meant that I was one of the last to finish, I later saw that 90% of the other participants were younger than me and 20% did not finish in time (though I'm not sure if that includes those who didn't start). One of my motivations for doing that this year was that I had the feeling that now was the time to do this. If I waited a couple of years then maybe it would be too late. It looks like that was a good judgement. And now everyone keeps asking me about next year.  I don't know. A few days ago the idea filled me with horror, but now that I'm recovering a bit...